Show more »
Questions
No questions
yet
Ask a question about the hotel
to experts and get answers
in the next few hours.
Ask a Question
HOTEL EXPERTS
Similar hotels 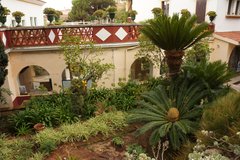 The hotel is located 500 meters from the beach and 300 meters from the center of Lloret de Mar. The total area of ​​the territory is 5000 square meters. The hotel was built in 1970, renovated in 2002. Cosmetic repairs are carried out annually.

Location 90 km from Barcelona airport. 30 km from Girona airport. 300 m from the center of Lloret de Mar.
Description of the beach The Playa de Lloret beach is 500 meters from the hotel. There is a road between the beach and the hotel. By the pool sun loungers, umbrellas - free of charge.
In a hotel

Smoking is prohibited throughout the hotel and in the rooms. Pets are not allowed.

For kids
Entertainment and sports Slot machines for a fee. Evening show (professional shows from May to October), animation (live music program once a week) - free of charge. Animation is provided in English, Spanish, Catalan and Russian. On the beach, water sports: canoeing, banana boating, water skiing, parasailing.
Description of rooms